INK are thrilled that the NEW CUT FILM COMMITTEE based at the Halesworth Cut theatre has selected four films from the festival weekend to be shown later on in the year in a public screening.

The selected films include-

Two 60-somethings begin to feel those first pangs of love once again. But first, they have to negotiate that tricky Third Date…

A heart-warming tale of a 5-year-old girls mission for the Bounciest Ball in the World Ever!

Romantic drama. A dogged army corporal, on the verge of medical discharge, begins an unexpected relationship with a local woman but struggles to leave his old world behind. V.P. explores ideas of masculinity in modern society. Written and directed by the team that created the number one selling iTunes short A Thousand Empty Glasses, starring James Wallwork (Casualty, Doctors) with cinematography from Eben Bolter (Mum’s List, Chicken, iBoy) V.P. premiered at Raindance Film Festival 2015.

After You by Jonathan Skinner

When a man holds a door open for a woman, that’s just being polite, isn’t it? But when he insists that she goes first, maybe that’s different.  AFTER YOU takes a poignant look at modern manners.  Kelby Keenan and Mark Springer play two strangers who have a brief encounter that may or may not change their views. Who is right and who is wrong?  You decide. AFTER YOU was shot entirely on location at The Barbican, London.  Directed by James Hughes and written by Jonathan Skinner. 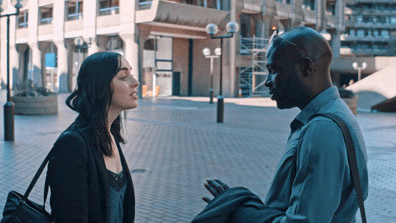 Date and time of screening TBC