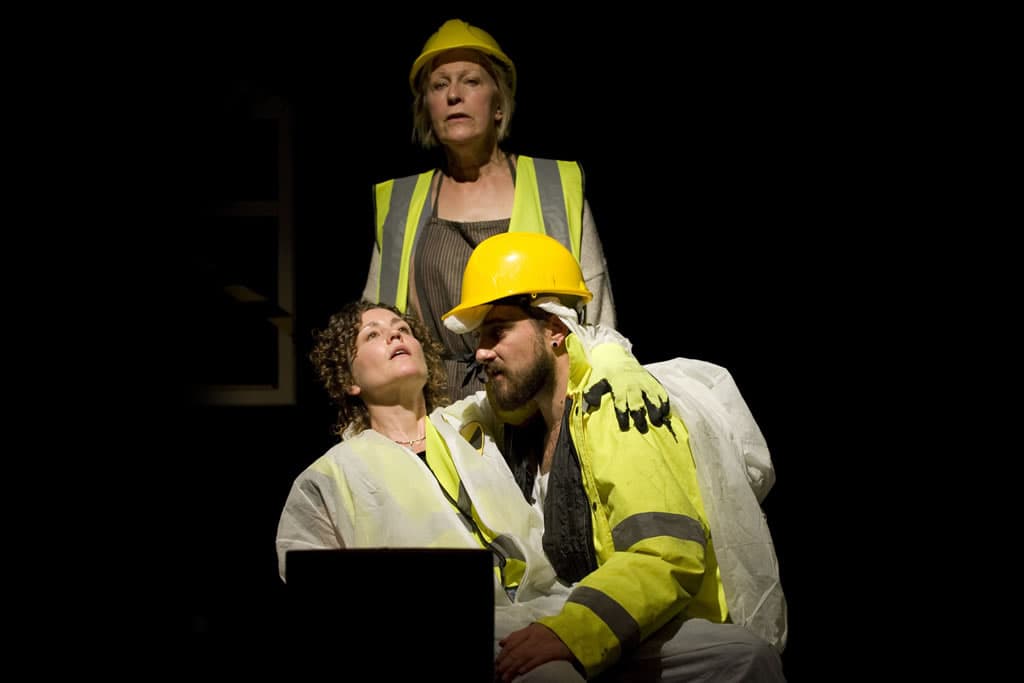 In early June, 2015, INK Festival took over The Cut Theatre in Halesworth. The brainchild of venue director James Holloway and writer Emma Struthers, INK is a platform for new and emerging creatives in Norfolk and Suffolk to showcase their work. I attended the opening night of this new festival, and was delighted by the unique treasure I stumbled upon.

Struthers’ drive is clear from the first moment you meet her; evidenced through her warm and passionate discussion of new talent, and her sense of generosity towards those who hold it. As she looks over last minute details, it’s clear she has established a strong sense of community even before doors open, and as eager audience members arrive to the sounds of local band The Occassionals, there’s a sense of keen curiosity that permeates the entire evening.

Throughout the night there are seven pieces of new work shown, each completely different from the last. The first is Powerhouse by Thea Smiley, in which we see one woman’s tranquil existence destroyed with a resounding crash. Black Mirror meets The Good Life as two government officials commandeer Miss Best’s quiet Suffolk home as a new site for a nuclear power station, what results is a farcical yet effective clash of domesticity and corporate power. It’s a highly relatable concept and, whilst there are occasional moments of discord, Smiley’s work holds serious promise in its dystopian warmth tinged with a very British sense of humour. The subtlest moments work best in this play, in particular the striking closing image of Miss Best singing whilst her governmental companions lie huddled, motionless, on the floor. The simplicity of this ending hints at everything this play could become, and the depth Smiley begins to reach through her approach.

Shirley Day has two very different monologues performed through the night: Reading Between The Lines and Number 22. The former transports us into another unusual domestic scene, that of a librarian-turned-detective in a small Welsh town who takes it upon herself to solve a local murder. An amiable, quirky character, Day’s protagonist seems the kind of woman we all known in some form: a well-meaning busybody who knows everyone’s gossip. This monologue feels more like a friendly conversation as we are increasingly drawn into the community of this fictional world. She’s the woman every crime reader wants to be, solving mysteries with logic, good spirits and a cheery sense of humour, and as she simplifies the psychosis of murder into a neatly packaged plot, it’s hard not to get caught up in the fun of it all. Number 22 however, is less pleasurable to witness. A wealthy old man looks back on his life through the meals he has eaten, speaking in metaphors and trailing anecdotes. What Day does well here is show how bigotry and narrow mindedness can destroy those who wield it, which actor Alan Bolton takes on with might. The problem is that it makes her character utterly intolerable which, I expect, is the point. His misogynistic words aptly display a fading generation that we are all too happy to leave behind, and Day helps us wave goodbye without a hint of remorse.

Leaving the domestic world, Michelle Sewell and Kevin MacLusky both present us with two different yet complimentary snapshots in time. For Sewell’s Write Into War we are ushered into a makeshift war bunker downstairs, into which characters Sarah and George burst alongside chiming bells and the harsh glare of fluorescent lights, and the night takes a serious turn. In Sewell’s world a bus has blown up on the border of Poland and Russia, and amidst the intrigue, confusion and an upcoming election it is up to Sarah and George to write the Prime Minister’s statement. This work is full of eloquent rhetoric masterfully delivered by actors David Palmer and Emma Parsons; we’re close enough to see their hands tremble, to feel our nostrils fill with smoke when George nervously puffs on a cigar, and yet it is a struggle to discern what is really happening. As the duo grapple with which country to blame, Sewell highlights the murky elements of power, morality and politics. The piece is poignant without being overly dramatic, striking a nuanced balance between complex issues and subtle writing. The most arresting element of Sewell’s writing is the emphasis that we don’t know what happens next. Her characters leave the room as suddenly as they arrived; we are left only with the traces of what is left behind, and the potential disaster that looms on their horizon.

In Kevin Maclusky’s Lifted, character Malky finds himself in another enclosed space, trapped in a lift with only his smart phone for company. This phone seems a little too smart however, and existential crises ensue. Minerva (a thinky veiled disguise for an evolved Siri) is an all-commanding, deity like voice booming across the stage, constantly challenging Malky’s views and pointing out the flaws of the cut throat corporate world. MacLusky’s writing is sharp and witting, but unfailingly human. His combination of questioning and comedy presents a piece that is mature and challenging but also unfailingly funny. When Malky finally escapes the lift he leaves profoundly changed by his experience, and MacLusky leaves us encouraged to keep questioning ourselves too.

As well as plays there is poetry and music to discover across the night. Performance poet Rowan James performs his first completed show, Easy For You To Say, an exploration of the idea of normality within society, a topic of personal interest as James has dyspraxia himself. It’s refreshing to see this kind of diversity on stage, as James challenges perceptions of disability his words resound with relatability, and ultimately proves that you don’t have to be ‘normal’ in order to create work that resonates with an audience. Between each performance there is also original composition from London based composer Tom Hartley Booth. His atmospheric melodies echo across the room throughout the night: alternating between haunting, emotive and playful but always tinged with beauty, there is a sense of something special brewing when they play.

Living As Humans Do is the closing work of the night. Writer Emma MacLusky’s piece is filled with twisted fairytales and Arthur Miller style dialogue. MacLusky turns the stories we know so well on their head, the most effective of these being the male bear from Goldilocks’ story as a dejected but caring father, miles away from the machismo patriarch of the original story. It’s a unique world, filled with drawling accents, quirky humour and moments of brilliant animalistic acting that borders on farcical as an array of fairytale characters flood the stage. Amidst the chaos-tinged scene however, one moment stands out brilliantly. ‘It’s all the humans fault, they imagined us!’ reverberates across the room, and it feels like a heading that should be over the entire night. Every tragedy, insight or laugh has come from the imagination of the small creative team and upon remembering this we are reminded of the expansive power of the human imagination. It’s a wonderful thought to close on, and one that remains in the minds of the audience well after the final bow is taken.