With well over 1,000 acclaimed performances of a one-man show headlining in the west end and touring small venues, Iestyn Edwards gives advice in making your own work,  booking dates and doing your own press and PR.

Iestyn Edwards will be performing his One Man Show at the INK Festival 2017. 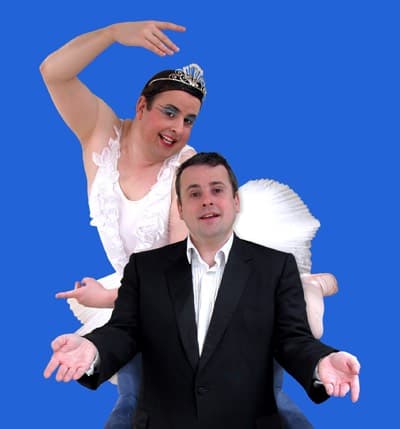 Described by the Liverpool Post as part panto dame, part stand up, part classical ballerina, total hit – has to be the result of a drunken one night stand between Anna Pavlova and Captain Mainwaring, we see the extraordinary character, and the man behind it, who has taken Iestyn from the west end, through the Blackpool Tower Ballroom, to Iraq, Afghanistan and back – just!

From entertaining troops in Iraq and Afghanistan, concurrently headlining at the Café de Paris, Rah Rah Rooms and the London Hippodrome, private performances for all the senior members of the royal family – with the exception of Prince Charles – the Olivier Award winning show C’est Barbican and two series on Channel 4. Iestyn’s early experience came touring countrywide from age four with my father, Country and Western singer Terry Edwards – and with his mother, Eirwen, who channelled evidence of a cold case murder in Hemel Hempstead and was banned from doing any more of her psychic act.

He trained as a Hammerstein Chanter at Southwark Cathedral, then later at Guildhall and first played Madame Galina during the inaugural Rag Week Revue. He sang two seasons in principal roles with British Youth Opera, gave recitals at Southwark Cathedral, Loseley Hall and the Chelsea Arts Club, and held a singing tutorship at the Guildford School of Acting. After a private performance for Her Majesty in 2005, wires got crossed and he ended up on four tours to Iraq and Afghanistan entertaining for Combined Services Entertainment. Woman’s Hour made him Forces’ Sweetheart and Joanna Lumley played his recording of “Tom Bowling” during her 2006 appearance on Desert Island Discs. The book about his war-zone experiences: My Tutu Went AWOL! is being published by Unbound Books.

‘A rare and perfect synthesis of art and larkiness…the audience howled with laughter, stamped and cheered!’  The Times

‘Bravissimo…the jokes are spot on and he is essential viewing.’  Evening Standard

‘The audience howled with laughter, stamped and cheered!’ The Times

‘Read the room perfectly to get belly laughs from us all!’ Team Origin

‘You were the highlight of my wedding. You looked beautiful, your ballet was fantastic and your routine was utterly hysterical. Thank you so very much!’ Lady Antonella von Brasz, wedding for Henry Bonas Events